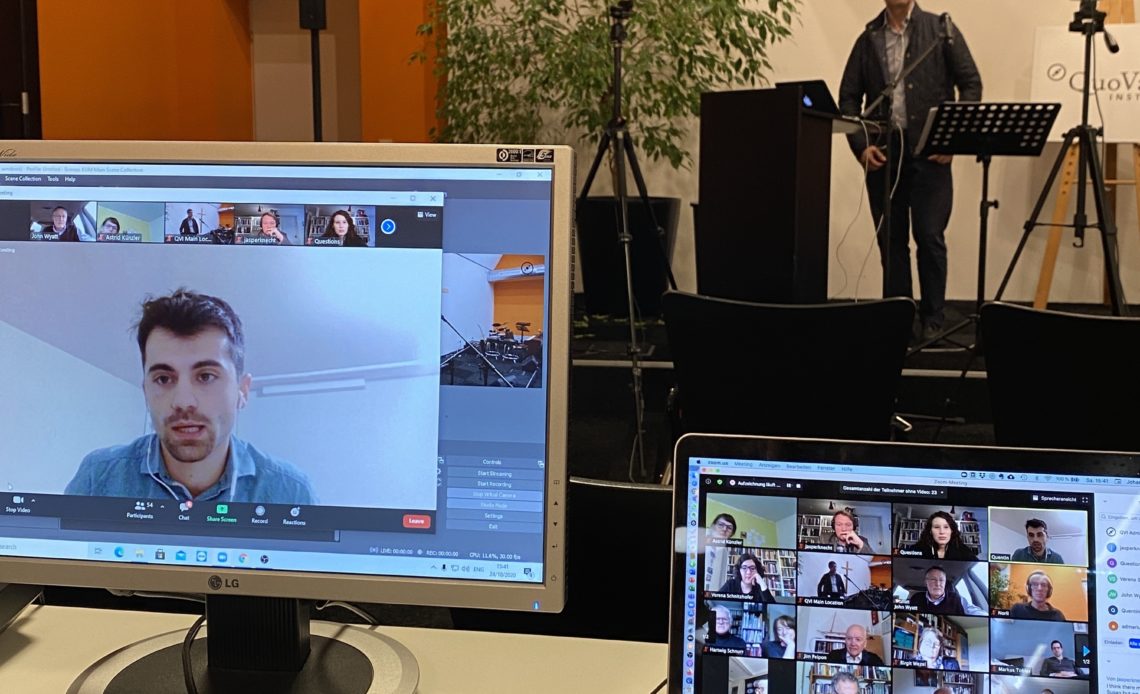 On Saturday the 24th of October 2020, the Quo Vadis Institute organised its latest Annual Consultation. As usual, it was a time in which friends and associates could come together, reconnect, and reflect on one of the main issues or challenges of our day. This year, we focused on the impact of the Coronavirus pandemic on our work. Instead of simply highlighting the problems and challenges many of us are faced with, QVI chose to focus on the opportunities and structural changes experienced in the respective guilds.

Even though QVI was resolute in not wanting to contribute to the stream of—in many cases warranted—troublesome news, this year’s Annual Consultation felt one of these negative implications acutely. Due to the travel restrictions, it was impossible to meet in person, as we normally do, at the iconic Schloss Mittersill situated in the beauty of the Austrian Alps. The benefit of this, however, was that, in addition to fewer airmiles, quite a few people were able to attend who would otherwise not have been able. This year’s consultation was attended by approximately 75 people!

During the consultation, we welcomed inputs from and conversations with five individuals, active in three distinct fields of work: Healthcare, the Arts, and Government & Public Policy. Each session consisted of an interview or input, followed by a general Q&A.

In the first session, we were honoured to welcome Prof Dr John Wyatt from the UK and Dr Quentin Genuis from Canada. Both are medical practitioners with a specific interest in the fields of medical ethics, human dignity, and the intersection of theology and the medical sciences. In a conversation led by Dr Jasper Knecht, Prof Wyatt and Dr Genuis discussed the way in which the current pandemic has sharpened their understanding of what it means to be a physician.

Opposed to a calling grounded in the promise of a good livelihood and a certain position in society, they were struck by how their fundamental Christian calling to servant leadership, self-sacrifice, and an acknowledgement of the ‘other’ created in the image of God, aligned so well with their self-understanding as a physician during this crisis. They also highlighted that a recognition of the God-given dignity of each human being forced them to find ways to honour this dignity in a system that does not always does so. Furthermore, and encouragingly, they stressed the importance of (and healthcare professionals’ need for) the wider church’s support through prayer and conversation. Their overall message was aptly captured by Prof Wyatt’s closing remark: “The heart of what it means to care is not about being clever, it is not about having solutions, it ultimately is about ‘being there’.”

So, the first session can be highlighted with the following points:

The second session was a conversation between Johannes Wigand and Astrid Künzler. Künzler is an accomplished artist primarily active in the field of dance. She is also part of the leadership of the Swiss dance-festival Tanzfest Winterthur. Besides this, she is strongly involved with the organisation Arts+ Switzerland. At the beginning of our time with Künzler, she gave us an overview of the way in which the festival tried to accommodate the restrictions imposed by the Swiss government. This presentation led us to discuss a difficult question asked of many artists these days: how should we evaluate the societal tendency to see the arts as not relevant to the maintenance of society, and therefore of low priority for support in times of a pandemic? Künzler made two points in response to this: first, the view of the arts as less relevant does not take the essential nature of ‘calling’ into account. Granted, so Künzler, everyone could be doing something different, but if we honour the belief that people have a calling and particular giftings, this approach is a complete misfit. Second, there is an even further extending corollary to this ‘output’ or ‘monetary’ oriented evaluation of who and what is necessary or relevant to the maintenance of society: it reduces the worth of people to the type of work they do, and therefore the ground for their value is misplaced. Humanity’s worth and dignity is then seen as based on their production and not their createdness. A proper consideration of artistic expression as an essential part of our createdness, might help guard against overly simplistic reconstructions of human value and dignity.

After the session with Astrid Künzler, we can make the following summary statements:

The third session, looking at Government and Public Policy, consisted of two inputs: the first by Dr Susan Kerr and the second by Hermund Haaland. Dr Kerr, in conversation with Stefania Knecht, discussed ‘populism’ in liberal democracies. According to Dr Kerr, thinking about the nature of populism is important for Christians for a variety of reasons: first, as about 25% of the European vote goes to populist parties, they hold quite a significant amount of power in Europe’s representative democracies. Second, Christian language is sometimes used to argue for populist positions (think for instance of the German AfD or the Dutch PVV), especially in the context of questions surrounding immigration and culture. However, this Christian language is appropriated for different uses, and sometimes even employed by people who do not actually believe in God. These appropriations can easily lead to a strong misrepresentation of Christian faith and priorities. Christians ought to be aware of these arguments and find ways of dealing with them helpfully.

Dr Kerr further explained that populism should not be thought of as a political position, but rather as a particular style of argument. Populism emphasises the distinction between a certain ‘us’ and another ‘them’. The aim is often to strengthen the ‘us/them’ divide, rather than to reduce or remove it altogether. Dr Kerr, in the end, encouraged us to ask ourselves two questions: does a policy further social justice? And does this policy call for inclusion or exclusion? In other words, does it call for a strengthening of differences or does it try to bring people together?

After the session with Dr Susan Kerr, we can summarise:

Our time with Dr Kerr was followed by a conversation between Dr Andrzej Turkanik and Hermund Haaland, a social & serial entrepreneur from Norway and the founder of the thinktank Skaperkraft. The conversation with Haaland had us consider two main topics: entrepreneurship and issues related to work and faith. Haaland argued that the shrinking welfare state due to the COVID pandemic has forced younger people, as well as people who have lost their job later in life, to start their own companies instead. According to him, this push towards entrepreneurship is positive, especially considering Europe’s lagging behind Asia and the USA. Haaland argues for the continued existence of the welfare state, as this fosters motivated entrepreneurship. However, Europe requires a lower amount of regulatory red-tape to allow younger people to start new companies more easily, whether out of motivation or necessity.

Haaland further argues that there is a correlation between faith and the starting of a new company, as both require a “stepping out” and trust. Hence, Christians should try to be at the forefront of entrepreneurship. However, as the Church has lost its place at the table as an influential voice in Europe’s culture, Haaland hopes this time of need might give ample opportunity for the church, and thus young Christians, to reimagine their calling and feel thoroughly motivated to be active in an entrepreneurial manner.

Lastly, our time with Hermund Haaland can be concluded as follows:

We look back at the Annual Consultation as a success. The discussions really showed the importance of thorough and critical thinking in this time. This last year has shown many of us that an understanding of what human beings are, made in the image of God, really does make a huge difference in the workplace. Human beings cannot be seen as only crucial for economic output. The way we see human beings and society must remain based on and informed by what Scripture shows us about humanity’s worth as God’s creation. It is as beings created in God’s image that Christians specifically should be active in the areas of entrepreneurship, politics, healthcare, and the arts, bringing light even in times of a pandemic.

Public Lecture on 29 October: "Grace and Gratitude in Times of War"