Who Won the Peace? Europe at the end of the Second World War was a mess. 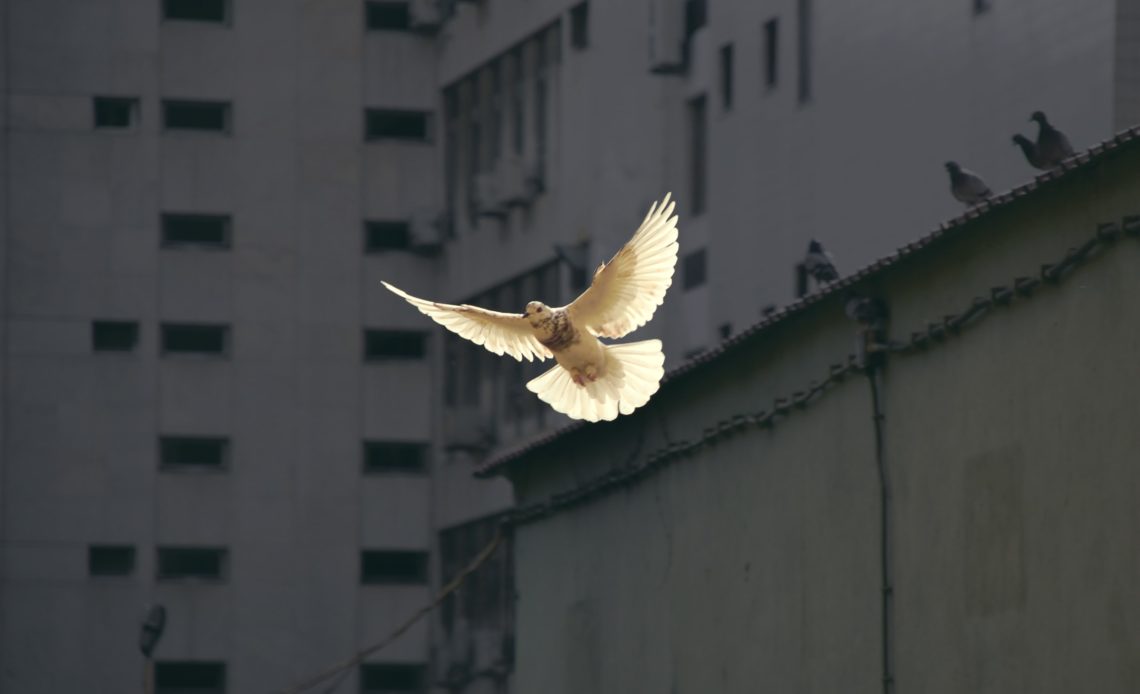 We have all seen the pictures of Allied soldiers being met by flag-waving crowds as they drove through the liberated towns of France, Belgium, and the Netherlands, giving out chocolate and kissing women. Yet these euphoric scenes quickly gave way to the daunting reality of rebuilding a devastated and divided Europe.

For Hitler’s defeat did not automatically guarantee peace across a devastated and divided continent. Chaos threatened on all sides. Hatred and bitterness towards the enemy and collaborators poisoned grass-roots attitudes among victor and defeated alike. Families had been separated, divided, and destroyed. Deep wounds festered physically, psychologically, and spiritually. Hunger, poverty, and unemployment added to the miseries of injury and upheaval. Streams of refugees looking for shelter, food, clothing, and security totally dwarfed anything we are currently experiencing in Europe today. Communist agitators attempted to destabilise the new democratic governments, in France and Italy especially, spurred on by the Kremlin. The Cold War was about to begin. Today’s generations have never known the climate of mistrust and suspicion, crisis and conflict that dominated Europe over the five years following the war. Post-war Europe remained volatile and vulnerable to the imminent threat of communist domination, through military, political and trade union action.

The 1948-9 Berlin Airlift–when Allied planes were landing at Tempelhof Airport up to every 45 seconds to bring in supplies to the blockaded western sector of Berlin–is a reminder of the desperate struggle that continued after the surrender of the German army. Post-war European history could have been very different. Two and a half decades after the collapse of the communist grip on Eastern Europe, we are tempted to forget how real, threatening and apparently permanent this domination was. The peace and prosperity Europe has enjoyed since the war, especially in the west, was not simply the natural consequence of the demise of the Third Reich. Rather, it was the fortunate convergence of several key factors; especially American economic aid through the Marshall Plan launched in 1947, and the trans-Atlantic military partnership of nato forged two years later. Both of these, however, could have foundered on the mistrust and bitterness among the European nations which came perilously close to repeating the mistakes of the past.

The Marshall Plan and NATO were necessary supports from the outside, like scaffolding on a building. But something had to change on the inside, in the hearts of the Europeans, for a lasting peace to be built. Many wanted Germany to be wiped off the map, divided into smaller entities, or carved up among the other nations.What could be done differently this time to break the seemingly-inevitable cycles of war among Europe’s tribes?

France and Germany in particular, with their central geographical location, habitually had behaved like alley cats scrapping over morsels of borderlands, repeatedly dragging their European neighbours into full-fledged fights. Twice in the first half of the twentieth century, European brawls–with these two nations in the thick of it–had become global conflagrations. Families of each generation had lost loved ones. Young men grew up expecting to be drafted for another war.

Today thoughts of such conflict among EU nations are unthinkable, thank God! Thanks also to the story of the stunningly rapid, yet lasting Franco-German reconciliation after the Second World War. For that story is central to the whole post-war European development. It is the story involving a small committed group of statesmen who shared common Christian values, vision and convictions concerning the essential foundations for Europe’s future.

It is a story with a central figure, widely respected and known for his integrity and humility, and universally acknowledged as the ‘Father of Europe’. Yet the name Robert Schuman remains largely unknown or ignored in the English-speaking world today. If recognised, it is often confused with that of the nineteenth-century German composer, Robert Schumann (double ‘n’). English publications about this man are scarce.

Schuman–one ‘n’–was born in Luxembourg. His French father had moved across the border from Germany-occupied Lorraine and married a girl from Luxembourg. His father died quite young and Robert became very close to his mother who raised him a devout Catholic faith. He was educated in German-speaking schools and universities as a lawyer, but when the Great War broke out, he was called up for service. He failed his medical and was given a clerical job.

When France regained Alsace-Lorraine, Robert chose to become a French citizen, and moved back across the border. There he was given the task of harmonising the laws with the French national legislation. His astute mind and his deep faith were deployed to create a unique legal situation allowing room for faith-based institutions in the newly-restored region in an otherwise secularised nation. To this day, this law is called Lex Schuman.When his mother died, Schuman considered becoming a priest, but a friend persuaded him to go into politics, saying that ‘the next generation of saints will wear suits’. The young lawyer’s integrity and acumen made him popular as a politician and soon he was serving in the national parliament.

When Germany invaded France in 1940, Schuman was the first MP to be arrested. Clearly a man of that integrity and skill would be a problem for the occupiers. He was kept in solitary confinement for seven months, but as a man of prayer and devotion, Schuman used that difficult time to strengthen his spiritual life.His captors changed tactics, and gave him more freedom, putting him under house arrest, hoping for some kind of cooperation. Instead, after concluding that the German war effort could not be sustained, and learning about their treatment of the Jews, he made a dangerous escape through 700 kilometres of occupied territory to the free zone of France to share this information.

There he sat out the remainder of the war, preparing for the end he knew would come. While still underground, he shocked his hosts by insisting that the French would have to learn to forgive and love the Germans in order for Europe to be rebuilt. That sounded simply like treason to them. But forgiveness and reconciliation remained his goal when after the war he was appointed Foreign Secretary in successive cabinets, and even served as Prime Minister for a short term.

Schuman drew inspiration from his Christian faith and Catholic social teaching as he searched for an alternative to the old order of nation states which had emerged in Europe since 1648, the end of the Thirty Years War. He met the leader of the Moral Re-Armament movement, a Lutheran evangelist named Frank Buchman, who also promoted a message of forgiveness and reconciliation. He in turn introduced Schuman to the German leader, Konrad Adenauer, the start of a friendship with long-term significance.

Schuman kept looking for a way to prevent the vicious cycle of war. Together with fellow-Frenchman Jean Monnet, he secretly devised a plan to link the coal and steel industries of France and Germany under an authority independent of the two governments. This would ensure that neither nation could develop an independent war machine. After receiving Adenauer’s covert support, Schuman presented this plan to the French cabinet in vague terms, sufficient to receive permission to announce the plan that evening.

The date was May 9, 1950. That date has since been officially recognised as the birthdate of the European Union and is celebrated (or ignored) as Europe Day across the 28 member nations. Arguably, this day was the defining moment of post-war Europe. For in a speech lasting a mere three minutes, Robert Schuman laid the foundations for the European House in which today half a billion people in twenty-eight nations live together in peace. The press described the announcement as the ‘Schuman bomb’. Headlines read: “France surprises the nations’. Schuman’s own prime minister had not even realised the full implications of this scheme during the cabinet meeting earlier that day. But now the cat was out of the bag. The plan had been announced and all democratic nations in Europe were invited to join this new scheme, to be called the European Coal and Steel Community.

From that moment on, there was a plan on the table to bring nations in ‘ever closer union’ with the end result, in Schuman’s thinking, a ‘community of peoples deeply rooted in basic Christian values: ‘freedom, equality, solidarity and peace’. Schuman believed these values stemmed directly from the teachings of Jesus. Europe’s future, he argued, depended on the recovery of these (Christian) values.

Many other key players were to influence this plan over the following decades as it unfolded step by step. From the start Schuman urged ‘that spiritual progress should go hand in hand with the material’. He insisted that this enterprise was not just economic and technical, but that it needed a soul. That advice has gone unheeded and sixty-five years later the European project is facing major challenges, partly as a result. But the fact that war had been made unthinkable among the member states of the EU made it a deserving recipient of the 2012 Nobel Peace Prize.

Thanks primarily to Robert Schuman.

Jeff Fountain, together with his wife Romkje, is the initiator of the Schuman Centre, which is based in Amsterdam, NL. He also writes the ‘Weekly Word’, a weekly column on issues relating to Europe.

Article by courtesy of Jeff Fountain and the Schuman Centre, NL 2010.